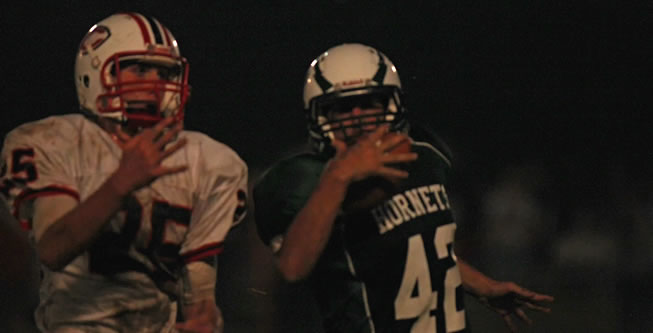 Hornets top Canton in the fog

The Wellsboro Varsity football team picked evened their record to 2-2 on the year as they defeated Canton, 21-15.

After coming off a tough loss to Cowanesque last week, and without head coach Steve Boyce on the sidelines, the Wellsboro defense rose to the occasion and kept the Canton rushing attack in check, despite Canton scoring first. The Warriors scored with 5:34 left in the first quarter on a 1 yard run by quarterback John Bowman to take a 7-0 lead. The Wellsboro defense would hold Canton scoreless until early in the fourth quarter.

The Hornets got on the scoreboard with 9:19 left in the second quarter as Junior Fullback Wyatt Covert rumbled for three yards. Sophomore Jack Chambers added the extra point to even up the score at 7-7. The Hornets struck right before halftime as Sophomore Quarterback Michael Pietropola connected with Senior Tight End Dan Saniga on a 25 yard pass to put Wellsboro up 14-7.

Up until tonight the second half has been Wellsboro's achilles heel, but the Hornets came out of the locker room fired up and kept the pressure on Canton. Both Wellsboro and Canton traded possessions in the third quarter until Pietropola scrambled 80 yards to increase the lead to 21-7. Canton scored early in the fourth quarter due to good field position, but the Wellsboro defense played big to secure the 21-15 win.

"We came out fighting right from the beginning," said Offensive Coordinator Matt Hildebrand. "The kids kept their heads up throughout the week despite the adversity from the previous game.

"We struggled the last few weeks with getting the ball in the end zone, but we came out tonight and fought hard for the win."

Pietropola led the Hornets in rushing with 23 carries for 119 yards and a touchdown. He also went 3-12 for 62 yards and a touchdown through the air. Saniga caught all three Pietropola passes on the evening. Jack Chambers went 3-3 from extra points on the night. On the defensive side, Covert led the team with 13 tackles. Senior Connor Coolidge recorded 10 tackles and Seniors Ben Shaw and Thomas Straniere added in 10 tackles each. Freshman Anthony Cooper added one interception for 23 yards.

With the win, the Hornets 2-2 overall (1-1 NTL Large Division). The team will be back in action next Saturday afternoon as they hit the road to face Columbia Montour Vo-Tech.

Ed Weaver is the owner of Circle W Sports in Wellsboro, PA, is the Sports Director for The Home Page Network and the creator of WellsboroAthletics.com and WellsboroFootball.com. You can follow him on Twitter or friend him on Facebook.