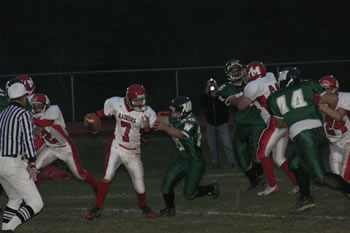 The Wellsboro Green Hornets (2-5) got on the winning track Friday night as they shutout Montgomery 26-0 in the last away game of the season.

The young and undersized Red Raiders (0-7) came into the game as the only NTL team without a win. The Hornets, however, only managed one touchdown in the first half.

The Hornets had trouble executing on offense during the opening half and missed some key blocks. A couple of sacks and three lost fumbles did not help either.

"We can't turn the ball over like that and expect to win games," Morral said.

He added that eliminating turnovers is something the team and coaching staff needs to work on.

Montgomery got the ball first, but the Hornet defense held the Red Raiders to a three and out, forcing a punt.

Wellsboro responded with a drive of their own, which was topped off by a five yard touchdown run by senior Jesse Tom. The extra point by Pat Driebelbies put Wellsboro up 7-0.

Tom ended the night with 146 yards rushing on 25 carries. He also caught two passes for 19 yards. He could have broken 200 yards, but an 80 yard gain was called back on a penalty.

Following that opening score, the Hornets could not find the end zone for the rest of the half as penalties and turnovers killed potential scoring drives. They had to settle for a one touchdown lead going into the locker room.

The Hornets picked up their second touchdown on an 11 yard strike from Tim Shaw to Mitch Christman. Driebelbies added the extra point to put Wellsboro up 14-0.

Driebelbies found another way to score midway through the final quarter. Chris Copp blocked a Montgomery punt and Driebelbies came up with the ball in the end zone. The conversion attempt failed, but Wellsboro was up 20-0 at that point.

Tom sealed the deal for Wellsboro as he ran the ball in from 32 yards away late in the fourth quarter and wrapped up the 26-0 victory.

In addition to Tom's performance, Jake Coolidge carried the ball 44 yards on 10 rushes while Jake Monks picked up 49 yards on 6 carries.

Shaw was 6 for 10 passing and picked up 90 yards. Christman caught two balls for 27 yards, while Coolidge and Pat Clark caught one each for 35 and 9 yards respectively.

Defensively, Chet Johnson had an interception and the Hornets held Montgomery to 129 yards of total offense. Montgomery's best performance came from Jason Finck, who rushed 12 times for 44 yards.

The Hornets close out their season at home. Next up is Cowanesque Valley (1-6), who Wellsboro will host for homecoming. After that is Wyalusing (5-2) and the season wraps up with the rivalry game against North Penn (6-1).

The Wellsboro Junior Varsity team improved their record to 5-2 after defeating Montgomery 19-0 on Monday.