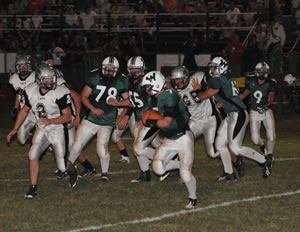 Athens' Nick Carl connected on a four yard pass to Curt Moore heading into the end zone to put the Wildcats on the board 7-0 early in the first quarter of Wellsboro's homecoming battle with the Wildcats.

Casey Shiposh took a 10 yard run to score in the second quarter, with Carl returning into the end zone back-to-back for a 27-0 lead over the Hornets at the end of the first half.

In the third quarter, Troy Stivason scored on a 28 yard pass from Carl while Athens secured the shutout with Austin Depew's one yard run into the end zone in the fourth quarter.

Ben Shaw has totaled 33 completions for 564 yards passing so far this season, including eight touchdowns.

Thomas Johnston posts 33 attempts for 147 yards rushing with two touchdowns, while senior Ethan Callahan has been a solid asset on offense with eight receptions for 238 yards.

Wellsboro will play host to South Williamsport this Friday, October 1.

"We match up well against South Williamsport," commented Wellsboro head coach Brandon Falk. "The boys are excited to be playing at home this week with another chance to ring the bell and we are getting a couple of key players back from injury and ineligibility so hopefully being at full strength will make a difference on the field."

Thomas Johnston and Connor Coolidge have been defensive leaders this year despite the high number of total points given up and Ethan Callahan and Nick Saniga have been offensive leaders.

"Nick (Saniga) has been adjusting to a new position this season and is really emerging," stated Falk. "Ethan (Callahan) is performing as expected. We knew going into the year that he would be a big weapon for us and he has not disappointed."

"Brian Doty, Eli Kennedy, and Chad Daugherty are younger players looking to make improvements as the year goes on and they grow into full time varsity caliber athletes," concluded Falk.