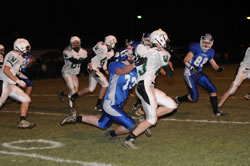 The Morton F. Jones Trophy will remain in the possession of the North Penn Panthers, as they defeated the Wellsboro Hornets in a 42-6 matchup on Friday, November 4, at Island Park, Blossburg.

The annual rivalry matchup was a sweet ending for the Panthers' season, after narrowly missing the District IV playoffs.

"We were very pleased with the outcome. The players were very focused, they are always excited to play Wellsboro," commented North Penn head coach Tom Dickinson. "Also, knowing we needed to win to make the Eastern Conference playoffs added to their focus.

"Weather has been a large factor to our success these last two weeks. We have had good days to practice which allows us to work on the little things and to work hard on special teams. It was evident that special teams were a big factor on Friday," continued Dickinson.

Within the first two minutes of the matchup, North Penn's Jason DeHaven capitalized on a two yard stint into the end zone, scoring after the opening kick off and yards gained by Skye Stiner and a 12 yard pass to Jimmy Price.

On a blocked punt return on Wellsboro's possession, by senior Logan Wise, the Panthers' Derik Remley picked up the ball and ran for 25 yards increasing North Penn's lead to 14-0 with the two-point conversion.

Nick Harer blocked the next attempted field goal by the Hornets, with DeHaven on recovery and Taylor Hillson charging for an 87 yard touchdown to lead 21-0.

In the second quarter, Marquis Delgado tip-toed between the Hornets' defenders and squeezed through with a 33 yard touchdown run, leading 28-0. Delgado returned again late in the second quarter off a 74 yard punt return, followed by Logan Wise with a one yard jump over the line to hammer out a 42-0 lead at the end of the half.

The Panthers returned in the second half with their special team units and controlled the ball game to the conclusion.

In the final quarter, Wellsboro overcame a shutout as senior Thomas Johnston dove for the end zone from one yard out, falling 6-42 at the horn.

"We are excited the way our special teams have been improving at this point in the year. We showed Friday that it was a total team effort in the defeat of the Hornets," continued Dickinson.

"The North Penn game was sort of a heart breaker," stated Wellsboro head coach Steve Boyce. "Don't get me wrong, they are a good team and very well coached, but we didn't play our kind of game. We never quite got into a rhythm on defense and had some calls go against us that were huge.

"Going in we expected a tough, hard-hitting game and it was. We needed to show up like we did against Towanda and that just didn't happen," Boyce stated.

DeHaven posted 42 yards on four passes, along with Skye Stiner adding to his total for 77 yards rushing, Delgado with 56 and Bryce Zaparzynski with 41 yards.

North Penn (6-4) will advance into the 2011 Eastern Conference playoffs, beginning on Friday night, November 11 with a matchup at Island Park with Hughesville (5-5). Game time set for 7:00 p.m.

"We are looking forward to Friday's playoff game vs Hughesville. Our goal of winning a championship is still a possibility," concluded Dickinson.

The winner of Friday night's matchup will advance to the championship game with the winner of Catasaqua (7-3) and Tamaqua (5-5) on November 18 or 19.

"Overall our season went well," stated Wellsboro coach Steve Boyce. "We had wins over teams that we hadn't beaten in years and were in just about every other game. We gave up 237 less points this year and at the same time drove the ball very well.

"In the beginning we had a problem with penalties and a year long problem of fumbling the ball, especially in the red zone. We have work to do in the off season, but the ground work has been laid. Players know what is expected of them to play going forward and they know they have to work hard to earn the right to get on the field. Our future is looking very good and the staff and myself like what we have to work with in the coming years.

"Our captains really set the tone for our season and kept the team together and focused. Without that strong leadership for guys to look up to you are just spinning your wheels," stated Boyce.

"Offensively we had many. Ben Shaw is a three year starter that took command of the offense this year and ran it well. He was about 80 yards shy of throwing for 1,000 yards and a few yards shy of running for an additional 300.

"Thomas Johnson was a force in the backfield while Chase Barnes opened a lot of holes for him. On the line Austin Cooper and Connor Coolidge were stalwarts on the line. Dan Saniga stepped up big as our leading receiver from his tight end position.

"On Defense it was many of the same guys. Johnston went over 380 career tackles while Cooper and Johnston led the team in tackles. Shaw had three interceptions, one returned for a touchdown, and Chase Barnes added two more," Boyce continued.

"The two biggest surprizes on defense were the solid play of our two freshman corners Michael Pietropola and Nick Marple, and the versitility of Thomas Staniere. Thomas played both defensive back and defensive line in big wins for us. In the fourth quarter of our Montgomery game he played on a kid that had been torching us in the second half. Once Thomas was one-on-one with the kid, he didn't have another catch all night.

"In the Loyalsock and Wyalusing game he created havoc in their backfield all night long," Boyce concluded.