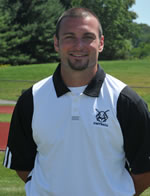 Coach Falk became the 13th head coach in Wellsboro Football history after being hired in the Summer of 2009. Coach Falk is originally from Eldred, Pennsylvania where he attended Otto-Eldred JR/SR High School. After graduating from High School, Coach Falk attended Alfred University majoring in Athletic Training and played Outside Linebacker from 1997-2000.

Upon graduation in 2001, Coach Falk spent two years as a graduate assistant linebacker coach at Alfred University while working on his Master's Degree in Secondary Education. After graduating in 2003, Coach Falk was the head coach at Smethport Area High School while student teaching.

Coach Falk left Virginia in 2006 and moved to Warren, Pennsylvania where he was the head coach at Warren Area High School for the 2006 and 2007 seasons while serving as a science teacher at the middle school and anatomy teacher at the high school.

Coach Falk currently resides in Wellsboro and teaches Biology at Wellsboro Area High School. He enjoys running is his "spare" time and has completed four marathons in the past three years. Coach Falk is also the co-adviser to the Junior class.