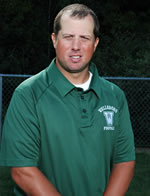 Coach Morral was head coach for the Hornets from 2003 to 2008 and was involved in the program for eleven years. Coach Morral worked hard to build the program around a demand for discipline as well as a concentration on getting the most out of each athlete as a person and as a football player. Coach Morral has compiled an overall record of 28-33 within his six years as head coach at Wellsboro Area High School and has sent numerous players on to play at the collegiate level.

Coach Morral lives in Wellsboro with his wife Lauren. Coach Morral played an active role in the Gridders Club during his coaching career and was also very active within Small Fry Football and various other programs and organizations around the area.

Hornets' season comes to an end against South Williamsport in D4 AA semis.

The Search Is On.

Coach Morral steps down after 12 seasons.

Hornets get shut out by Jersey Shore in a delayed game.

Hornets notch a win in opener.

Hornets down Sayre in season finale.