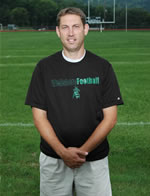 Coach Zuchowski was the Head Coach of the Middle School team in 2009 after spending the 2007 and 2008 seasons as a member of the Wellsboro Varsity Coaching Staff. During his time on the Varsity staff, Coach Zuchowski was the Offensive Coordinator for Chris Morral and also coached the quarterbacks and defensive backs.

Coach Zuchowski began his coaching career for the Rock L. Butler Middle School while attending Mansfield University. He soon joined the Varsity staff under then-head coach Russ Manney, where he coached quarterbacks and defensive backs, before landing a teaching job in Leonardtown, Maryland.

As an English teacher at Leonardtown, Coach Zuchowski worked as an assistant football coach and head boys' track coach. He again coached quarterbacks and defensive backs and worked as the offensive coordinator for the Junior Varsity program.

After two years at Leonardtown, Coach Zuchowski landed a job as an English teacher and athletic director at a junior/senior high school in Johnsonburg, Pennsylvania. While serving as athletic director, he also took on several coaching responsibilities. These included head boys and girls track coach and assistant football coach. He again focused on quarterbacks, running backs, and receivers, and assisted in coordinating the offense.

Coach Zuchowski is currently the 7th and 8th grade reading teacher and is also the head coach for the Girls Track Team and an assistant cross countrycoach. Coach Zuchowski resides in Wellsboro with his wife, Pam, and their daughter, Audrey.