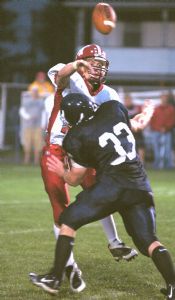 MUNCY - Montgomery filled the hole and it appeared Muncy running back Frank Smith would be stopped for little or no gain.

68 yards later, Smith was in the end zone and Muncy was off and running. Smith shed a would-be tackler at the line of scrimmage and streaked up the left side line, setting off a 42-point first-half eruption as Muncy defeated Montgomery, 42-8 Friday night at Stanley Schuyler Stadium and captured The Old Shoe Trophy for a third straight year.

"The line did a good job for me and I went from there," said Smith who finished with 131 yards and two touchdowns on just four carries. "You just have to keep pumping your feet and work right through it."

Smith's extra-effort touchdown run was just the jolt Muncy needed to record its first win of the year after losing two straight games to undefeated Bloomsburg and Towanda. After gaining just seven yards on their opening possession, the Indians scored six touchdowns on just eight plays over their next six series, while gaining 239 yards.

"That (Smith run) just took the pressure off," Muncy coach Scott McLean said. "We have more experience than they do and I think from there things kind of snowballed."

It was more like an avalanche and it continued immediately after the Smith touchdown. Matt Johnson deflected a pass and Robbie Smith intercepted it on Montgomery's ensuing play, returning it 28 yards to the Montgomery 11-yard line. One play later, Dan Murphy connected with Eric Lehman for a touchdown pass and the rout was on.

Montgomery played Lehman one-on-one and the 6-foot-2 speedster burned it, turning all three of his catches into touchdowns. The coverage was good on Lehman when Muncy's offense took over again, but Murphy made a good throw and Lehman made an even better 36 yard catch while falling in the end zone for a touchdown. Lehman capped his performance with a 24 yard touchdown reception, making a nice move after the catch to go the final five yards and give Muncy a 35-0 lead.

"We made a lot of mental mistakes," first-year Montgomery coach Randy Boone said. "Lehman had a couple nice catches down there and things started to fall apart after that."

The young Red Raiders did show some improvement during the second half. Working mostly against Muncy's reserves, Montgomery (0-3) outscored the Indians 8-0 and scored its first touchdown since the first quarter of Week 1 when Jason Finck ran in from three yards out. Finck gained all 136 of his yards in the second half, while Bobby Hecknauer played a solid defensive game, making six tackles and blocking a punt.

Montgomery actually had a few other second-half chances to score, but lost two fumbles inside Muncy territory and was stopped on fourth down late in the game after driving inside the 20-yard line.

"There's a lot of heart there and when they came out in the second half they said they were going to win this second half no matter what it takes," Boone said. "There's no quit in them."

But there was no stopping Muncy's first-team defense. Tackles Aaron Harmon and Brandon Jarrell prevented Montgomery from doing any inside running, while ends Greg Balliet and Zach Martin constantly pressured quarterback Cody Kulago and disrupted his timing.

Linebacker Wes Smith also made his presence felt, stopping Finck for a four-yard loss on a fourth-and-one in which he almost ripped the handoff right from Kulago's hand.

"We did good. We worked hard all week and it came together," Frank Smith said. "We kept practicing hard and this is a good win to start out with."

Smith scored his second touchdown late in the second quarter, taking a pitch to his left and breaking free for a 58 yard touchdown. Fellow underclassmen running back Tad Lupold also scored.

The game was scoreless for more than seven minutes, but Muncy scored 21 points in just 1:28 before Smith capped the first-quarter explosion with his second touchdown.

"We needed this," McLean said. "The thing is we're a good football team, but at the same token we play one heck of a schedule. We needed this one big-time."