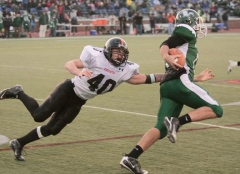 LEWISBURG - Once again in 2010, the Towanda Black Knights were not destined to be Dragonslayers. Just like one year ago, an undefeated Towanda team saw its hopes of a District 4, Class AA football title shattered by the Lewisburg Green Dragons. This time the occasion was the semifinal round and the site was Bucknell's Christy Mathewson Stadium, and the final score was 39-14.

Lewisburg mixed hard-nosed football with a touch of trickery on offense, while throwing a defensive blanket over the normally-potent Towanda attack. Merle Moscarello rolled for 204 yards on 21 carries and backfield mate Nathaniel "Nook" Brown finished with 80 yards on 12 carries, including a pair of touchdowns. Both Moscarello and Brown came into the game with over 1,000 yards rushing, so their production was not a surprise. The wild card was third back Nick Kifolo, who gained 97 yards on just five attempts with two of his carries ending up in the end zone.

Already leading 19-0 with half a minute left in the first half, Lewisburg coach Todd Tilford reached into the bag of tricks and pulled out the venerable flea-flicker play. Quarterback Cam Cassels took a short drop and pitched a lateral to wide receiver Robby Gaines, who lofted a forward pass downfield to Brandon Smith. Smith's catch and run completed a 47 yard touchdown play to put the Dragons up by four touchdowns going to the locker room.

Earlier, Cassels had passed 10 yards to Ryan Lopes and Brown had run the ball to paydirt from 12 and three yards away. Gaines was wide on two of his first three kicks and had another kick blocked in the second half.

Midway through the third quarter, Towanda's offense was finally ignited when Jordan Dawsey ripped off 61 yards from his own 15-yard line to the Lewisburg 24-yard line on his only carry of the night from scrimmage. Quarterback Cody Miller ran to the 11-yard line, and after a pair of short gains, Miller hit Mason Roof for the final eight yards.

Both Lewisburg's second half touchdowns were on sweeps by the elusive Kifolo, who scored from eight and then from 47 yards.

Towanda coach Craig Dawsey was brief and straightforward in his post-game comments. "They're a real good football team, and we didn't play a very good game today," he observed, taking time to note that his team loses only eight seniors from a squad that went 11-1 in what was expected to be a rebuilding year.

Lewisburg moves on to play top-seeded Danville in the District 4, Class AA championship game next Friday night at Danville.