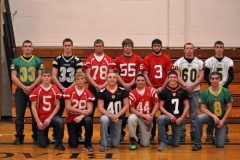 In a year where several teams at the top it was a tough call for the major award winners.

Tioga went the furthest of any team and only lost to Waverly in a close back and forth game during the regular season.

The Tiger's running backs ran for over 3,000 yards this season despite losing top rusher from last year Cody Bennett. The Tioga line was a big part of that and one of the key linemen was Carter Jackson, the All-Region Player of the Year.

Tioga's Tyler Spires is the Defensive Player of the Year, the hardnosed leader of the Tiger defense.

Troy's Jed Wright is the Offensive Player of the Year after rushing for over 1,500 yards including several 200 yard rushing games.

The Lineman of the Year is Athens' Jon Canfield who anchored the powerful Wildcat running attack and defensive line.

Towanda sophomore Noah Huff is the Newcomer of the Year. He had to take over the reigns on offense when senior starter Trey Sites went down and had over 1400 yards of combined offense despite missing a game himself.

The Coach of the Year is Waverly's Jason Miller. Miller's squad was the only team from the area to go undefeated in the regular season and bested both Athens and Tioga in that time.

On offense the First Team is Waverly's Zach Cooney at quarterback, Tioga's Jesse Manuel and Spires along with Athens' Tyler Birdsall at running back with the three wide receivers Waverly's Austyn Bostwick, North Penn's Sam Bohnert and Athens' Ray McDougan.

The tight end is Wildcat Curt Moore while the offensive linemen are Jackson, Tioga's Jake Howland, Canfield, Towanda's Dave Canfield and Troy's Koty Kendall. The kicker is Athens' Troy Stivason while Wright is on at versatility.

The defensive backs are Canton's Eddie Larcom, Athens' Austin Depew, Cooney and Troy's Justin Bradley. Troy's Josh McClaren is the punter while North Penn's Taylor Hillson is on at versatility.

Huff headlines the second team offense at quarterback with Tioga's Brad Jump at fullback and Wellsboro's Jermain Brooks and Sayre's Kyle Post at running back.

The punter is Canton's Chase Pepper while the versatility is Troy's Isaac Havens.