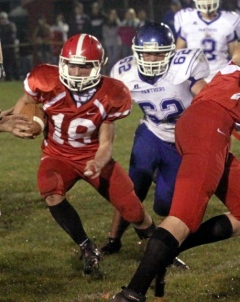 TROY - The Troy Trojans made light work of the North Penn Panthers Friday night, beating them handily, 49-14. Despite sloppy and cold playing conditions, The Trojans were able to rely heavily on their offense to get the win.

The Trojans took little time to get on the scoreboard. After North Penn's opening drive stalled at midfield and forced them to punt, Troy used five consecutive run plays to shorten the field before quarterback Jed Wright found wide receiver Ryan Reeves in the end zone to put the Trojans up by a touchdown with 8:19 to play in the first quarter. Josh McClaren's extra point gave Troy a 7-0 lead.

The Trojan defense held strong again on the Panther's next drive, forcing a three-and-out before the Panthers punted the ball again. The Trojan's wasted little time, as Wright took the ball himself down the right side of the field for a 64 yard touchdown scramble with 6:08 left in the first quarter. McClaren added the extra point to extend Troy's lead to 14.

Quarterback Jed Wright took hold of the game early and often, both on the ground and through the air, and head coach Jim Smith attributed his athleticism to his stellar on field play for the Trojans.

"Jed is a freak athlete," Smith said. "He doesn't 'wow' anyone with his speed, but he his deceitfully fast."

Wright ran for 139 yards and two touchdowns on eight attempts. He was also 3-for-4 passing for 64 yards and two scores against the Panthers.

North Penn's ensuing drive would put the Panther's into an even deeper hole, as quarterback Taylor Hillson's pass was intercepted by Justin Bradley, giving the Trojan's offense the ball at their own 39-yard line.

Troy's drive stalled, but not until after five running plays got them into position for McClaren to try a 45-yard field goal attempt. McClaren's kick was accurate but didn't have the distance, leaving the Trojans still clinging to their 14 point advantage.

North Penn would keep the ball into the start of the second quarter, and after a drive that saw them run eleven plays the Panthers punted the ball to the Trojans for the third time.

The Trojan offense didn't skip a beat from the first quarter, driving 83-yards on nine plays to stretch their lead even further. Wright again found a receiver, this time Darton Harwick for the 34 yard touchdown strike with 6:42 left to play in the first half. McClaren's extra point made the score 21-0.

North Penn would not be put away that easily though, as they compiled a 75 yard drive that saw Hillson find running back Lucas Grover in the end zone as he rolled away from pressure, giving the Panther's their first points of the contest. Sam Rotella added the extra point and the Trojan's lead was cut to 21-7 with 5:32 left in the half.

The Trojan's came out still firing in the second half, wasting no time as Wright again took the ball himself, this time 54 yards on a roll out play to the right side of the field that gave Troy their fourth touchdown of the game with 11:07 to play in the third quarter. McClaren's extra point was good and the Trojan's lead was extended to 28-7.

North Penn would not roll over yet, as half back Devin Remley ran for 33-yards and on the next play Hillson found Groover after shedding a tackle to pick up 36-yards. The quick two plays landed the Panther's one-yard from the end zone. Troy's goal line defense held the Panther's for no gain for three plays until a quarterback sneak by Hillson gave the Panther's their second and final score of the day with 9:06 remaining in the quarter. Rotella added the extra point and Troy's lead was cut to 28-14.

The Panther's looked to be back in business after a Brandon Mattock's fumble for the Trojans on their following drive was recovered by Hillson. However, a block-in-the-back penalty forced the Panther's into a first and twenty situations that they could not overcome and eventually punted the ball back to the Trojans.

Troy quickly took advantage of North Penn's inability to capitalize on their turnover, as Nick Stephani picked up 50 yards on their first play from scrimmage to land the Trojan offense at the opposing 3-yard line. Bradley would punch it in on the next play, and after a McClaren extra point attempt was made the Trojan's had a 35-14 lead with 6:30 to play in the third quarter.

After yet another North Penn punt, the Trojans used the rest of the third quarter to drive into the redzone before running back Greg Ellsworth punched it in to the endzone with 11:57 to play in the game. The McClaren extra point made the score 42-14.

North Penn's next drive would stay true to the story of the game, as their offense could not get the ball across midfield and were again forced to punt. Troy took advantage, running the ball eleven consecutive times and milking the clock to 4:27 when Mattocks again found the end zone for the final score of the evening. McClaren's extra point gave the Trojan's an astounding 49-14 lead and eventual victory.

Troy's Head Coach Jim Smith was pleased with the way his team executed on both sides of the ball.

"For the first time all year, I feel like we played a complete game," Smith said, "both offensively and defensively."

"Most of the credit goes to that line of scrimmage," he said. "You can have great athletes, but without a really good front you don't rack up the kind of rushing yards we do."

Troy will be heading to Hughesville next week and North Penn will host Columbia Montour Vo-Tech.