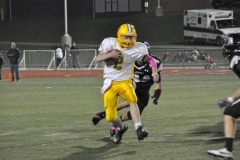 Athens - In a hard fought, back and forth contest, the Athens Wildcats outlasted the Wyalusing Rams 39-36 last night. Wildcat QB Aaron Barry scored on a 1 yard plunge with 1:27 left and the Athens "D" stopped Dylan Otis on a 4th down catch with 17 seconds left to seal the victory.

Athens scored first on a 25 yard Troy Stivason field goal, but would fall behind 21-3 as the Ram running attack picked up speed. First half scores included 41 and 15 yard runs by Lucas Jennings, and a 6 yard run by Dylan Otis.

The Wildcats would get untracked with a 10 play 69 yard drive capped by a 7 yard TD run by Brandon Sturzenegger. Stivason's extra point made it 21-10 with 3:15 left till half. Following a three and out, the Wildcat momentum continued as Sturzenegger scored on a 2 yard run to bring them within 21-17 at intermission.

Athens would pick up in the second half where they left off, driving 58 yards in 9 plays, with Barry running in for his second score on the night. A fake PAT pass failed, and the Wildcats retook the lead 23-21.

The Rams would not be outdone, traveling 76 yards in 14 plays, with Otis pounding in from a yard out. Jennings added the two point run, and the Rams were up 29-23 with 3:29 left in the third quarter.

Barry answered right back, hooking up with Troy Stivason on a 65 yard catch and run, and Stivason's PAT put Athens back on top 30-29.

Following a Wyalusing punt, Stivason added another field goal, this one from 46 yards to increase the lead to 33-29 midway through the 4th. But the resilient Ram offense followed with a 7 play 70 yard drive, capped by a 30 yard Jennings jaunt to change the lead yet again, 36-33. Athens got the ball back with 4 minutes left, plenty of time to travel 52 yards for Barry's winning plunge.

Sturzenneger led Athens with 220 yards on 28 carries with 2 scores, while Barry ran for two scores and threw for a third.

For Wyalusing, Jennings had 223 yards on 25 carries with 2 scores, while Otis chipped in with 89 yards on 18 rushes with 2 touchdowns.