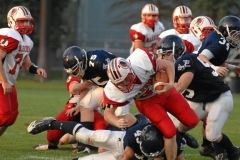 MUNCY - A 14-point second quarter proved to be the difference as Muncy defeated Canton 28-10 in the season opener on Friday night.

Canton struck first in the opening quarter as Brian Jannone hit a 27-yard field goal with 5:11 in the first.

1:53 into the second quarter Muncy got on the board as Maurice Brown hauled in an eight-yard pass from Eli Warnick and Joe Titman made the extra point to make it 7-3.

Tyler Moyle caught a seven-yard pass from Anthony Barberio with 1:08 left in the half and Titman made the extra point to make it 14-3.

In the third Dakota Nixon scored on a 52 yard run and Titman made the extra point as Muncy extended the lead to 21-3.

Canton cut into the deficit with 6.8 seconds left in the third as Noah Barnett scored on a one-yard run and Jannone hit the extra point.

However, that's as close as Canton would get as Tyler Wagner intercepted a Canton pass and ran it back 27 yards with 49 seconds left in the fourth. Titman hit the extra point to provide the final points of the game.

John Bowman was 2-for-6 passing for 52 yards in the game and Chase Pepper had a 41 yard catch, while Barnett had an 11-yard catch in the game.

Pepper also had an interception for Canton.

Nixon led the muncy rushing attack with 88 yards on nine carries. Barberio completed 6-of-8 passes for 77 yards and Warnick was 6-for-8 passing for 63 yards.

Brown hauled in five passes for 69 yards for Muncy in the victory.