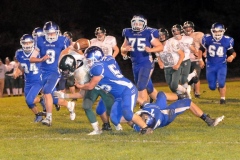 BLOSSBURG - After falling behind early the North Penn Panthers rallied to score 32 unanswered points on their way to a 32-6 win over the visiting Hughesville Spartans.

North Penn held just an 8-6 edge headed into halftime after two drive-stopping interceptions thrown by quarterback Bo Burleigh, but the Panthers didn't leave much hope for Hughesville once the second half got underway, outscoring the Spartans 24-0 in just the third quarter.

Neither team could move the ball much through the first frame, but in the second quarter Hughesville finally made the scoring breakthrough when quarterback Logan Henry found room to move on the right sideline and scampered into the endzone from nine yards out. The extra-point was blocked and the Spartans lead 6-0 with 5:17 remaining in the first half.

North Penn would answer before the half though, with Bo Burleigh bouncing back from his first half struggles to find Luke Kelly in the endzone for their first score with 25 seconds remaining in the half.

Burleigh again found Kelly on the two-point conversion to give North Penn the 8-6 advantage headed into the half. Burleigh finished the game going 14-29 through the air for 114 yards, two touchdowns and two interceptions. He also ran the ball twice for 66 yards. Kelly caught four passes for 34 yards and a score.

"That drive to answer them right before the half was a huge statement," North Penn head coach Tom Dickinson said. "It gave us a little confidence and it put their heads down."

North Penn would begin their third quarter scoring barrage with Burleigh throwing his second touchdown on the night, this one being hauled in by Brady Andrews on a bubble screen to score from five yards out. Bryce Zaparzynski punched in the two-point conversion to put the Panthers up 16-6 with 7:23 to play in the third quarter. Andrews finished the night with five catches for 47 yards and a touchdown.

After another Hughesville drive ended in a punt, Levi Christman scored the third touchdown of the night for the Panthers on a two yard up-the-gut run. Burleigh found receiver Dayton Wood in the endzone for the two-point conversion to put the Panthers up 24-6 with 3:06 to play in the third quarter.

Hughesville's offensive struggles would go from bad to worse on their next drive, as running back Nick Yeager coughed up the ball to give the Panthers the ball at the Spartans' 20-yard line. After failing to pick up the first down through three downs, Zaparzynski found room to get into the endzone from twelve yards out with 1:11 to play in the third quarter. Burleigh found Devin Remley for the two-point conversion to end the third quarter blowout and mark the final score for the game.

Zaparazynski finished the game with twenty carries for 118 yards and a touchdown, and three receptions for eight yards in the Panthers rout of the Spartans.

For the Spartans, quarterback Logan Henry went 9-18 through the air for 74 yards, and carried the ball five times for 20 and a touchdown.

"We spread the ball around to a lot of guys," Dickinson said. "That's what we need to do ... we can't just rely on one person, the whole premise behind this offense is to spread it around."

North Penn will travel to take on Cowanesque Valley next week.