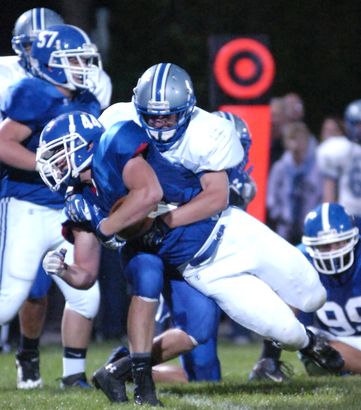 They say records are meant to be broken. After South Williamsport's 63-28 trashing of Warrior Run on Friday night Moutaineer fans must be thinking Dominick Bragalone is the one meant to break them.

Just three weeks after setting a school rushing record with 301 yards against Canton, Bragalone one upped himself with a 318-yard outburst against the defensless Defenders' defense.

Not to be outdone, Bragalone's record-breaking night didn't stop there.

Even his head coach couldn't help but marvel at the junior running back's record-setting performance.

Perhaps the greatest indication of just how "well on his way" Bragalone is, is the fact that he only played one second-half series and only needed 16 carries to produce such a gaudy stat line. He also had a seventh touchdown, a 59-yarder, nullified by a holding penalty, limiting what could've been an even more dominant performance.

"It feels great," Bragalone said. "It's homecoming and a lot of my friends were here and it just feels great."

Bragalone took South Williamsport's first offensive snap 77 yards to the house to give the Mountaineers a 7-0 lead just 1:05 into the game

"It was good blocking," Bragalone said. It was really good block and I found the hole."

"That really set the tone, Eiswerth added. "After a tough loss last week to Southern [Columbia] you always want to come out and start fast against any team. After that there was no looking back."

The score was 28-0 nothing at the end of the first quarter. Bragalone's 28-yarder 2:45 into the second quarter extended the lead to 35.

His 80-yarder with less than a minute to go in the first half gave him 264 rushing yards and five touchdowns at halftime.

Warrior Run quarterback Hunter Raup did his best to keep the score respectable, but the Mountaineers' rushing attack, which used eight rushers to combine for nearly 420 yards, was simply too much to overcome.

Raup finished the game 13 of 27 for 179 yards and one touchdown. He also scored on a quarterback sneak with just :01 left in the second quarter.

The win improves South Williamsport's record to 4-1. The team travels to Hughesville next Friday.

Bragalone doesn't exactly have an encore planned for the Spartans, but he does have his sights set on some pretty lofty goals for the season.