Trojans roll to win at Athens. 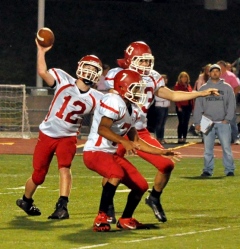 ATHENS - Athens simply had no answers for Jed Wright and Troy's high-powered offense.

The Trojans piled up 541 yards in total offense, including 419 yards in the first half, en route to a 56-15 win over Athens here Friday night in NTL Large School action at Alumni Field.

Troy coach Jim Smith said this game is one his kids have had marked on the schedule.

"These kids have never beaten Athens. We had two games against them last year, including a real close District playoff game we lost.

"This game was important for their confidence, not only to win, but to dominate the game," said Smith. "I think we did that."

Dominate the Trojans did.

Wright carried the ball four times for 57 yards on their first possession, a six-play, 77-yard drive that culminated on a 8-yard TD run by Brandon Mattocks. Josh McClaren, who was 8-for-8 on extra-point attempts, split the uprights on the PAT to make it 7-0 with 9:39 remaining in the first quarter.

Athens' first possession ended when Mattocks stepped in front of a Troy Stivason pass at the Troy 45.

Wright broke loose on a 17-yard run on the first play of Troy's ensuing possession and then capped a five-play drive with a 25-yard TD run to make it 14-0 with 5:11 left in the first quarter.

After a three-and-out by the Wildcats, Troy took over on its 48. Two plays later, Wright connected with Ryan Reeves on a 43-yard TD pass to make it 21-0 with 2:50 remaining in the first quarter.

The Wildcats next possession ended with a 4th-and-23 from their own 6. Stivason's 44-yard punt was returned 13 yards by Wright to the Athens 37.

After a 29-yard run by Ross Sherman and a 6-yard run by Diante Jones, Wright hit Mattocks on a quick slant for a 2-yard TD pass on the first play of the second quarter to make it 28-0.

The Wildcats' next possession featured a 28-yard completion from Stivason to Cody Cain, but the drive stalled at the Athens 46.

The Athens defense stopped Troy for the first time on its next possession. After an 11-yard completion to Cain, Stivason connected on a 36-yard pass to Tyler Forbes, but he coughed up the ball at the Trojan 40.

The Wildcats put together their best drive of the first half, a 10-play possession that featured a 26-yard scramble by Stivason, but it stalled on downs at the Troy 25 with 1:16 remaining in the half.

A 39-yard run by McLaren quickly moved the ball into Athens territory to the 36. Facing a 3rd-and-9, Troy called time out with 22 seconds remaining in the first half.

After the time out, Wright lofted a perfect throw down the sidelines to Reeves for a 35-yard TD to make it 42-0 at the half.

In the first half, Wright completed 4 of 8 passes for 130 yards and three TDs and ran for 104 yards and a TD on six carries.

"We came into tonight dinged up," said Athens coach Jack Young. "Sometimes we move forward a couple of steps, then we go backward a couple steps. We're just not ready for that yet and Troy is a good football team and they have a lot of experienced players back.

"Speed and experience, it was the whole nine yards," noted Young. "We have a senior out sick tonight and we lost both wide receivers last week. There were times out there tonight where we had three freshmen on the field defensively. They're going to be great football players, but they're not ready to compete against an experienced team like that."

"I told the kids to file that one away and come back next week and work hard for us," added Young.

The Trojans extended their lead to 49-0 on a 1-yard TD by Stanley Zimmerman on their first possession of the second half.

Brandon Sturzenegger put the Wildcats on the board with a 36-yard TD run on the first play of the fourth quarter. Stivason's PAT cut the deficit to 49-7.

Three plays later, Athens backup QB Aaron Barry hit Cain in stride down the sidelines for a 74-yard TD strike. Nate Johnson ran in the conversion to cut the deficit to 56-15.

The Wildcats were held to 84 yards rushing on 23 carries. Sturzenegger led the way with 61 yards and a TD on 15 carries.

Mattocks had 65 yards and two TDs on just four carries for Troy, while Sherman added 56 yards on six carries, McClaren had 51 yards on four carries and Chance Lantz tacked on 45 yards on eight carries. In all, the Trojans ran for 411 yards on 42 carries.

Athens, now 2-3, is back in action Friday at Wellsboro, while Troy, now 4-1, travels to Loyalsock.