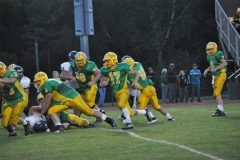 The hosting Wyalusing Rams used an effective running attack to take down the visiting Sayre Redskins 21-0. The Rams totaled 294 yards on the ground carving their way to the endzone three different times.

The Rams were led by sophomore running back Lucas Jennings who had a huge night carrying the football. Jennings ran the ball 22 times during the game and totaled 174 yards on the ground. He also found his way into the endzone on a 45-yard run. Jennings was not alone as junior fullback Dylan Otis ran the ball 19 times totaling 73 yards and pounding his way into the endzone twice.

With such an effective running game, the passing game was virtually unnecessary for the Rams. Junior Quarterback Justin Haley threw the ball just seven times, completing two of those passes for ten yards. The Redskins had a big performance out of senior running back Jeremy Kyc who ran the ball 11 times for 82 yards on the evening.

Wyalusing's defense came to play this week allowing just 143 total yards on the game. They outshined the Redskins' defense as Sayre allowed 304 total yards. The Redskins never once made it inside their own 20-yard line during the game.

All of the scoring that happened during the game

happened during the first half. Wyalusing scored a touchdown on each of their first three drives.

On the first drive of the entire game, the Rams marched 66-yards right down the field before Otis pounded his way into the endzone on a three-yard rush. Warner Mendoza would come in to covert the extra-point attempt.

Following a punt by the Redskins on their first drive of the game, the Rams went to work yet again. The Rams again marched 67 yards down the field before Otis followed his linemen into the endzone for a one-yard touchdown run. Mendoza would covert the extra-point.

The strong defense of the Rams forced a three-and-out on the next Redskins possession and looked at another 63-yard drive ahead of them. Again the Rams would find the endzone on a 60-yard plus drive. The drive was capped off by a spectacular 45-yard touchdown rush by Jennings who shed a few tackles on his way to the endzone. Mendoza converted the extra-point. At halftime, the Rams led 21-0.

With expectations high for the Rams entering the third quarter, not much action would take place in the second half. The Rams put together a few quality drives but were forced to punt each time.

The Rams would put together an impressive drive of their own in response to the recovered fumble starting at their own 42 and marching all the way to their own 11. Haley then mishandled a snap from the center and the ball was on the ground as a Redskins defender fell on it.

Starting at their own ten-yard line, the Redskins went to work with a few ticks left on the clock hoping to avoid a shut-out. Keir then lost the ball trying to avoid pressure in the pocket and the Rams would recover to secure the victory.