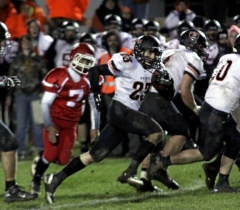 TROY - The Towanda defense that showed up to Alparon Park can only be described as relentless and goal-oriented (that goal being to pull away with the victory against the Troy Trojans in the first round of AA high school football playoffs).

The Black Knights held the Trojans to under ten points in their 17-6 defeat under the lights last night, clinching a spot in round two of post-season play.

"It was a great game," said Towanda quarterback Noah Huff, who had 14 carries for 66 yards and 9 completions for 123 yards and 2 touchdowns on the night. "I give this one to the defense. They tore it up the entire game. Our offense stepped up when we had to, but I definitely give credit to our defense." And tear it up they did. The Black Knight defense only allowed Troy to score once on the night, and they held them to one of their lowest rushing totals of the year. The Black Knights limited the Trojans to just 165 yards in the game with the Trojans entering the contest racking up an average of nearly 400 yards a game on the ground.

For the first quarter, and most of the second, neither team was able to score. Until finally, with less than two minutes left in the half, the Black Knights struck and put up the first 7 points on the scoreboard.

On second and eleven, Huff would complete a 49-yard pass to teammate Steven Yates for the touchdown with the clock reading 1:38. Tyler Basse added the extra point, and heading into the locker room for halftime, the Black Knights would take the lead, 7-0.

The second half of the football game was graced with that relentless Towanda defense that made an appearance early in the game, only allowing the Trojans 78 total rushing yards for the remainder of the game.

Finally, though, Troy was able to put some points on the board. A fifteen play drive would set the Trojans up at the Towanda one-yard line, and Nick Stephani would leap over the Knights' defensive line and into the end zone for the touchdown. With 11:57 left in the fourth quarter, Stephani's PAT would fall short, and Towanda would hold on to the lead with a score of 7-6.

Towanda immediately grabbed the momentum back with a scoring drive of their own.

The answered right back on their next possession, with another Huff pass complete to Steven Yates for the 49 yard score. Basse would add the extra point, and Towanda would extend their lead, 14-6.

Yates finished the game with two catches for 98 yards and the two scores and he ran the ball four times for 20 yards in the game.

Everywhere a Trojan ran, he was met by a handful of Black Knights within seconds.

This trend that began in the beginning of the game would continue until the final Trojan possession, when Towanda would take over on downs with under two minutes remaining in the game. Towanda would have to settle for a thirty-five yard field goal on the foot of Tyler Basse for their final score with nine seconds remaining in the game. And with that, the final score of the first round of the district play-offs was set at 17-6.

Towanda will advance to the District 4, Class AA semifinals where they will travel to Loyalsock next week, while Troy finishes the season with a record of 9-2.