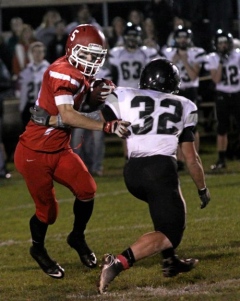 TROY - It was a battle of the underrated and of the determined last night at Alparon Park. The Troy Trojans reeled in their eighth victory of the season with a score of 38-28 over the visiting Athens Wildcats, who fought a good fight.

"I felt like the kids played hard," said Trojan head coach Jim Smith after the game. "Offensively we asserted ourselves. We did make a mistake and turn the ball over though, along with a couple of penalties that stopped us. Defensively, we have some things to work on. But with all of that said, I do feel pretty good about coming out of here with a hard-fought victory."

The two teams could not be more opposite of one another; Athens showed off their strong throwing game, whereas Troy racked up more than 400 yards rushing throughout the course of the game.

"Our offense stepped up and did a great job up front and that helped us to be able to run the ball," senior Brandon Mattocks commented. "Overall, it was a really good team win against a tough team."

The Trojan offense on their first drive was mediocre compared to what was accomplished during their second. Both teams traded punts at the beginning of the game, and it did not look promising until the home team regained possession.

Nick Stephani and Brandon Mattocks rotated running the ball on Troy's second possession, setting them up at the Athens 12 yard line. From here, Chance Lantz would run up the middle and into the end zone for the first score on the night. With 4:55 left in the quarter, Stephani's extra point would make it 7-0.

The Wildcat offense answered right back within the next minute. On third and 10 on their own 25, Tyler Forbes would complete the 75-yard TD pass to Kalen Keathley with only 3:49 to play. The Trojans would keep their lead at 7-6 as Austin Lister's extra point attempt would fall short.

At certain points during the night, the Trojan running game was too much for the visiting team to handle, as was the case on Troy's next drive. Ben Sherman and QB Isaac Havens tossed in some yards along with Stephani and Mattocks, bringing the ball to the Athens 5-yard line for a first and goal. Chance Lantz would then scuttle up the right side and cross into the end zone for the score. Again, Stephani's PAT was true, and with 1:08 left in the first quarter, the Trojans extended their lead, 14-6.

The remainder of the second half allowed for 10 more points on part of the Trojans and eight more on part of the Wildcats. Troy wasted no time after receiving the ball again, as they would score on a four play drive. From the Athens 46 on third and six, Havens would keep the ball and run in the 46 yards needed for the touchdown. With 9:53 remaining in the half, Stephani added the extra point, and the Trojans continued to lead, 21-6.

Although Athens never grabbed the lead, they continued to stay barely a step behind the Trojans, right on their heels. A hard-fought 11 play drive from Athens set them up at the Troy 16-yard line, where Forbes would show off that arm again with another touchdown pass, this time to Austin Lister. The Wildcats would then set up for the PAT, but they would fake the extra point and Aaron Barry would complete the pass to Bill Bennett for the 2-point conversion with the clock reading 4:54.

Troy wasted no time as soon as they received the ball again. Nick Stephani would shake off defenders for a 31-yard gain that would help in setting up the home team at the Wildcat 20. Stephani would again receive the ball, taking it 20 yards into the end zone for the touchdown. With 3:12 to play in the first, Stephani added the extra point and set the score at 28-14.

The second half ended on the note of a few penalties and a fumble, and neither team would score again before the clock ran out and they headed into the locker room.

Coming out on the other side, the Trojans looked for their first opportunity to score, and kicked down the door. Stephani would continue to gain yards on an effortless 33-yard score on a Trojan first down. He added the extra point as well, making the score now 35-14 with 6:20 left in the third.

Try and try again was the attitude of the Athens defense and offense alike for the remainder of the game. They managed to run dry the efforts of the Trojans on their next drive, causing them to punt from their own 31 on a fourth and 24.

From here, the Wildcats sprung back to life with a fiery two-play drive. Again quarterback Tyler Forbes would work that arm, completing another pass for six points to teammate Payton Lewis with 10:25 to go in the fourth quarter. Lister's PAT was good, but Troy still led, 35-21.

For a moment, the Wildcats were no longer the team they had been at the beginning of the season. Coming right off the score, they would recover a Brandon Mattocks fumble and regain possession at the Trojan 37. Forbes worked his magic, throwing three complete passes until finally, at the three yard line on first and goal, he ran it into the end zone for the easy score. Lister added the extra point, and with 8:29 to play in the game, the Wildcats cut the lead to 35-28.

The Athens defense would try their hardest to stop the Trojan running game during the home team's ensuing possession, and although they managed to halt them at the three yard line and force a fourth down, Troy had another plan. The final score was set at 38-28 when Nick Stephani added three more points to the board with a field goal, handing the Wildcats a tough and unforgettable loss.

Next week at Alparon Park, the Trojans will host the Canton Warriors for the 60th annual Old Shoe game and the Wildcats will host Sayre at home.