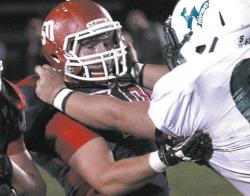 Wellsboro took home at least a piece of four of the five major awards while Troy's Kyle Schucker was named the NTL Large School Player of the Year by the NTL football coaches.

The Offensive Players of the Year were newcomers this year: North Penn-Mansfield's Brock Burleigh and Wellsboro's Quinn Henry.

The Defensive Player of the Year is Wellsboro's Parker Jones.

The two Linemen of the Year are Wellsboro's Owen Covert and Wyalusing's Dalton Chilson.

Green Hornet coach Matt Hildebrand and his staff are the Coaching Staff of the Year.

On defense the first team tackles are Kelley, Covert and Chilson while the ends are Jones and Athens' Bill Bennett.

Whitteker and Troy's Hunter Cohick are the first team strong safeties while Yates is the free safety.

The two cornerbacks are Keathley and fellow Wildcat Zach Sheppeck while Towanda's Tyler Basse is the punter.

Second team for offense is Henry at quarterback, Tremper at fullback with Towanda's Keegan Kisner and Zach Jayne at running back.

Bennett and Troy's Nate Swain are the two tight ends, Wellsboro's Chase Moser is the versatility while Lister and Brandon Lamphier are the two wide receivers.

Troy's Collin Binford is the kicker.

Athens' Aaron Barry is the honorable mention quarterback while the fullbacks are Newman and Wyalusing's Derrick Clark. Lewis is the runningback while Wyalusing's Jon Morrison is the tight end.

Frederick is the versatility pick with Troy's Alex Butcher the wide receiver.

The honorable mention kickers are Wellsboro's Nic Ingerick and Basse.