Wellsboro pulls away from North Penn-Mansfield for first D4 title. 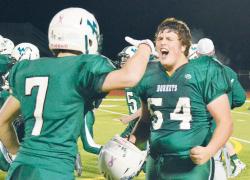 MANSFIELD — Entering the year the Wellsboro Green Hornets knew what people outside of the town were thinking.

After losing one of the best senior classes in school history to graduation the Green Hornets knew that they would be underdogs this year — and that's exactly how they liked it.

On Friday night the group of young underdogs did something that no one in school history had ever done before. They captured the District 4, Class A title, beating North Penn-Mansfield 33-12.

"This is a great group of kids," Wellsboro coach Matt Hildebrand said. "I'm so proud of this group. This really is a group of nobodies after we graduated so many big names."

They have been nobodies around District 4 when the season started, but now the group will start to become household names themselves.

"It feels so good, we worked so hard," Wellsboro's Chase Moser said.

While the Green Hornets scored 33 points on Friday, it was the defense that really made the difference in the win.

"The defense has been there for us the entire year," Hildebrand said. "It led to six turnovers in the game today."

Wellsboro quarterback Quinn Henry was happy that the defense gave the offense so many chances in the second half.

"We kept getting picks and fumble recoveries," Henry said of the defense. "It's nice to have the ball twice as many times as the other team in a half, that makes it easier to score."

North Penn struck first on Friday as the Panthers got on the board less than two minutes in.

Brock Burleigh hit Brendan Hill on an 18-yard pass just 1:57 into the game. The two-point try failed and the Panthers were quickly out front 6-0.

Wellsboro tied the game with 44 seconds left in the opening quarter when Henry scored on a 1-yard run. The two-point try failed and the game was tied at six.

The game stayed tied at six at the half, but in the second half the Green Hornets' defense came alive.

Moser started things off running back a fumble 45 yards and Nick Tremper ran in the two-point try and Wellsboro went up 14-6 at 10:09.

"We put a lot of pressure on them and they made some mistakes," Brandon Lamphier said of the defense.

The third quarter included five turnovers in the first 7:05 of the quarter, but late in the third North Penn got back on the board when Brad Pequignot scored on a 3-yard run with 20 seconds left in the quarter. The two-point try failed and it was 14-12.

From there it was all Wellsboro as their defense slowed down the North Penn passing attack, that had nearly 200 yards in the first half.

"We talked about in the second half stopping the pass," Moser said.

Just 1:21 after North Penn scored the Green Hornets were back on the board after Henry ran in from 10 yards out. Nic Ingerick hit the extra point and Wellsboro was up 21-12.

Henry scored another touchdown with 5:04 left from 3 yards out and the extra point failed and it was 27-12.

North Penn's last chance ended as Lamphier intercepted a pass and then Tremper scored on a 3-yard run with 39 seconds left in the game to cap the scoring.

"It feels so good, we worked so hard," Moser said.

"We all worked hard in the offseason and it paid off," Lamphier said.

One of the big keys this year for the Green Hornets was the play of the younger kids.

"We have a lot of sophomores and even freshmen out there," Hildebrand said. "It starts at the junior high level and the kids know you can't come in here and just be good, you have to put in the work."

Wellsboro's players feel like as the year went on those younger kids got better and better.

"From week one we had a lot of inexperienced kids," Moser said. "They just kept working."

One of the younger kids was Henry, who in just his sophomore year is one rushing yard away from becoming the first player in school history with 1,000 yards passing and 1,000 rushing.

While people outside of Wellsboro may not have known names like Quinn Henry, Parker Jones and Chase Moser before the year started, the Green Hornets feel like that just made this even more special.

"It definitely made this championship sweeter"” Henry said. "Everyone doubted us and said we couldn't win."

And, adding to the excitement for the Green Hornets is that their first district title came against their biggest rival.

"There is nothing better," Henry said. "Week 10 we played them and won. We play them again in the district championship and win. It was amazing, both sides of the stands were packed, we filled a college stadium, it's an amazing feeling."

Henry threw for 101 yards on Friday and he ran for 132 yards in the victory.

Tremper ran for 51 yards and Moser ran for 17 yards. Alex Kozuhowski ran for 5 yards for the Green Hornets.

Burleigh threw for 245 yards for the Panthers, with 163 of that coming in the first half.

Pequignot ran for 62 yards in the game and Burleigh gained 4 yards, while Mason Gee had 3 yards rushing.

Brendan Hill had 32 yards receiving and Pequignot caught 25 yards’ worth of passes.

A week ago Wellsboro was celebrating their first ever district playoff win. Now they are celebrating a district title and a week from now they will be taking on Old Forge in the state playoffs.

"It's been a great journey so far," Hildebrand said. "I want to continue this as long as I can. I think it speaks highly of the NTL and the quality of the league. We have two NTL teams in this game tonight."

Wellsboro's players are excited to see what happens in states.

"We will see what we are made of next week," Moser said.