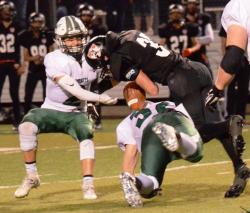 TOWANDA — It was a defensive struggle, but in the end the Wellsboro running game helped them leave Towanda with a 21-0 victory on Friday night.

The first half was a defensive slugfest as neither team could get much going.

The Green Hornets drove down the field on their opening drive, but they were stopped on fourth and one from inside the five as Towanda got the ball back.

A Wellsboro interception by Dalton Prough gave the Green Hornets first and goal from the four, but Towanda's defense held and Wellsboro ended the drive missing a field goal.

On their next drive, Wellsboro converted on two fourth downs and Chase Moser scored on a seven-yard run. Nic Ingerick hit the extra point and with 3:27 left in the half it was 7-0 Wellsboro.

The Green Hornets got the ball right back as Brandon Lamphier had an interception, however Dalton Potter of Towanda picked off a pass at the eight-yard line with 45 seconds left in the half for Towanda.

Wellsboro's offense got going in the third. Quinn Henry hit Parker Jones on a 27-yard touchdown as Jones made a one-handed grab. Ingerick hit the extra point and with 4:32 left in the third it was 14-0.

With 4:36 left Henry scored on a two-yard run and Ingerick hit the extra point to cap the scoring in the game.

Henry was 6-for-1 passing for 74 yards and a touchdown.

Keegan Kisner ran for 53 yards on 17 carries for Towanda and Griffin Sites ran for 22 yards on three carries.

Potter ran for 16 yards in the game.

Sites and Joe Koss each had two catches and Todd Koss had a catch for Towanda.

Jones had three catches for 59 yards for Wellsboro and Robert Brown, Aidan Hauser and Lamphier had catches in the game.