Towanda edges Troy in back and forth affair. 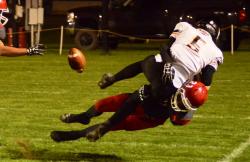 "It was a wild game, a lot of fun, too bad somebody has to lose that kind of a game," said Towanda head coach Craig Dawsey. "I'm glad we won, it was just one of those games that could have gone either way."

Troy received the opening kick but fumbled the ball back on their first play from scrimmage. The Black Knights moved the ball 30 yards before failing on a 4th and 4 from the 25. From there, the Trojans put together a 17-play, 75-yard drive, keyed by a 33-yard scamper by QB Clark Jackson. The senior signal caller would cap the drive with a 1-yard sneak, and Seldon Rogers' PAT put the Trojans up 7-0 at 1:53.

Troy put together another long drive to start the third quarter, marching 57 yards in 14 plays. But the drive stalled as Jackson was stopped short of the goal line on 4th and 1. However the Trojan defense would rise up and score the next points, tackling Kisner in his own end zone on the next play for a safety and a 9-7 lead.

The Black Knights went right back to the ground game, specifically No. 33 between the tackles, as Kisner carried 10 times in an 11-play drive, finishing with a 5-yard run for the score. The two-point try failed, and the lead changed hands 13-9.

Troy answered right back, needing only five plays to cover 40 yards. Jackson hit Zack Zimmerman for the TD on a 9-yard catch and run. A failed snap on the PAT changed the lead to 15-13.

Once again Coach Dawsey stayed the course, calling Kisner's number for eight carries on a nine-play drive, capped with a 9-yard Kisner TD run at 3:19 to put Towanda back up 19-15.

But Troy was not done, as Jackson changed field on a QB keeper, racing 44 yards to paydirt. The PAT was blocked, and the lead changed again, 21-19 with 2:53 left.

Way too much time for QB Tanner Kunkle, as he quickly moved the Knights 58 yards, completing three passes on the drive, the final completion to Griffin Sites for a 9-yard score. His two-point pass to Sites was also good, and the lead was now 27-21.

With one last chance, Nate Martin returned the ensuing kickoff all the way to the Black Knight 40. On first down Jackson connected with Ja Wallace on a 30-yard pass to the 10. But from there, three straight incomplete passes would close out Troy's chance for a happy ending to homecoming 2016.

Keegan Kisner led the Knights with 34 rushes for 209 yards and three TDs. Clark Jackson completed 12 passes for 135 yards and one TD, while rushing for two scores.

"We were fortunate enough to prevail," Dawsey said. "Our kids had a great time, I think their kids had some fun doing it too. It's too bad it was on their homecoming but that’s why you play."