Jayne, Athens pull away from Troy for homecoming win. 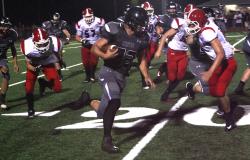 ATHENS — It was a happy homecoming for the Athens Wildcats last night as they defeated the Troy Trojans 46-7.

"Big win against a league rival, great crowd, great atmosphere, this is what high school football is all about," said head coach Jack Young afterward. "I felt we had to come out and control the line of scrimmage. We weren't very physical last week, but I felt we did a good job of being physical tonight."

Leading the charge was senior standout RB Zack Jayne, as he rumbled for 196 yards and two touchdowns on 19 carries. Backfield mate Damien Hudson added 163 total yards and two scores which included an electrifying 85-yard kick off return in the second quarter.

Athens set the tone early, putting together an eight-play, 67-yard scoring drive on their first possession of the game. The drive was capped by a 19-yard TD strike from Kaden Rude to Kegan Rude. Aric Westbrook added the extra point and Athens led 7-0 at 5:03 of the first.

They added to the lead on their next possession completing a 13-play, 74-yard drive as Jayne bulldozed his way in for the score from 8 yards out. Westbrook again added the PAT to make it 14-0 at 7:36.

The Trojans came right back, putting together an 84-yard, 11-play drive of their own. Tyler Williams finished the drive with a 2-yard plunge, and Seldon Rogers added the point after and it appeared we had a ballgame. But Hudson would take the ensuing kickoff 85 yards to pay dirt to open the lead back to 21-7 with 3:19 left till the half. The Wildcats would break the game open just before the half, with first-and-10 from their own 15 and 26 seconds on the clock. Jayne broke loose for an 84-yard jaunt and was taken down just before the goal line. QB Rude would keep it on the next play for the 1-yard run and the Wildcats went into the locker room up 28-7.

The second half saw much of the same Athens dominance. Jayne scored his second touchdown on the night, this time from 11 yards out to make it 36-7 at the 8:36 mark. One possession later Westbrook would hit a 37-yard field goal to make the score 39-7. At the start of the fourth quarter, Hudson broke through the middle for a 49-yard run to end the scoring and start the mercy rule clock at 46-7.

Jayne and Hudson led the Athens ground attack with a combined 359 yards, while Troy was led by Clark Jackson's 88 yards rushing and 87 yards passing on the night.

Next week Troy hosts Wellsboro while Athens takes on Towanda.