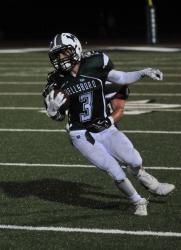 WELLSBORO — Canton wanted to go into Wellsboro and send a message.

It looked like they were primed to, jumping out to a 6-0 lead to start the game.

That's when the Hornets came back to send a message of their own, that they are the defending NTL Large School champions, by scoring 45 straight points en route to a 64-12 win over Canton Friday.

Quinn Henry had six first-half touchdowns to lead Wellsboro — four rushing and two passing — while running for 79 yards and throwing for 200 on 7-for-11.

That was part of a 556-yard day for the Wellsboro offense while their defense held Canton to 96 yards.

Alex Kozuhowski (three carries, 64 yards) also had a strong game on the ground for Wellsboro.

Dalton Prough had two catches all game for the Hornets and both were for scores. He finished with 86 yards receiving.

Kozuhowski had two catches for 54 yards as well.

Michael Smithers was 6-for-15 for 44 yards under center for Canton while he also had 61 yards rushing on 11 carries for the team's two touchdowns.

Camden Smith had one catch for 27 yards to lead the Warriors.

Smithers got Canton on the scoreboard with 7:35 left in the first quarter with a 1-yard punch.

With 4:03 left in the quarter Wellsboro got a safety to go up 9-6, followed by Henry getting his second rushing touchdown of the day with 2:35 left in the first. Ingerick's kick was good to make it 16-6.

With 22 seconds left Henry found the end zone again, this time on a 28-yard pass to Prough. Ingerick's made it 23-6 after the first quarter.

Less than three minutes into the second Henry scampered 30 yards for his third rushing touchdown. Collin Pietropola ran in the two-point conversion to make it 31-6.

With 4:14 left in the half, Henry punched one in from a yard out to put the Hornets up 37-6 after Ingerick's point after.

The Hornets got their final first half score with 12 seconds on the clock as Prough caught a 58-yard pass from Henry to make it 45-6 after the Ingerick kick.

Smithers got Canton back on the scoreboard with 10:35 left in the third quarter on an 80-yard run. The two-point conversion was no good.

Moser scored Wellsboro's third quarter touchdown from a yard out with 3:46 left to play in the quarter. Ingerick's kick was good to make it 51-12.

Then in the fourth, Orsborn had a 1-yard rushing touchdown while Ramsey scored from 13 yards out with nine seconds to play for the Hornets' final two scores.

The Hornet defense held Canton to just one first down while both teams saw the yellow flag.

Wellsboro was penalized six times for 54 yards while Canton had eight penalties for 42.