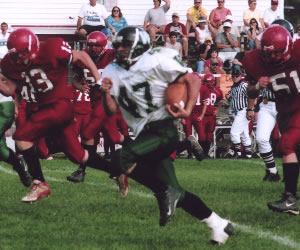 It was hard to find anyone who would take the credit for the Wellsboro Green Hornets' final drive that gave the football team a 20-18 victory over the Canton Warriors Saturday afternoon, September 10 in Canton.

Despite that, Wellsboro (2-0, 2-0 NTL) drove 96 yards in the game's final minute to cap another come-from-behind victory and ruin Canton's homecoming game.

The drive, which was helped along by two big penalties against the Warriors, ended with a 35 yard pass from Tim Shaw to Cameron Hubbard and four second showing on the clock. The Wellsboro marching band even started playing "Another One Bites the Dust" after the completion. "It wasn't me. Give credit to the Lord," said Shaw after the game, quickly adding "and the offensive line and the hands of Cameron Hubbard."

Hubbard said that he wanted to line up in the slot and challenge Canton's linebackers with his speed. He was able to beat the defense and get open for the pass. "Great pass," he said "Great pass and I thank the line for protection, too." If credit goes anywhere, it is the heart that the young Hornets are showing this year. "Canton played a heck of a game, but Wellsboro refused to give up," said Hornets head coach Chris Morral. Shaw agreed.

The defense stopped a quarterback keeper run by Canton's Bryce Weaver at the six yard line. On the first play, Shaw hit Jake Monks for 38 yards to bring the ball out of the shadow of the goal posts and put it on the Wellsboro 45. Shaw then spiked the ball to stop the clock. After that, things went from bad to worse for Canton. On the next play, they were called for pass interference and were penalized 15 yards. On the next play, Canton sacked Shaw for five yards. A subsequent delay of game call against Wellsboro had the Hornets looking at third-and-20 from midfield. Wellsboro again caught a break when Canton was called for roughing the passer on the next play.

The 15 yard penalty gave Wellsboro first-and-10 from the 35-yard line and time to run two more plays. Shaw then hit Hubbard for the game clinching touchdown. The two-point conversion was no good and Wellsboro took the 20-18 lead. Special teams stopped the ensuing kickoff return well short of the needed touchdown.

A key to the win, according to Morral, was a return to the fundamentals. He talked to the team at halftime about the fundamentals and the will to win. Wells bo ro was down 18-8 when they went to the locker room. "We missed blocks and we missed tackles," in the first half, Morral said. But he stressed the will to win and his squad responded. In the first half, the defense seemed to have trouble shuting down Canton's dual running threat of Quay Ward and Corey Fromille. They accounted for most of the yards on Canton's opening drive of 67 yards, which culminated in a 12 yard touchdown run by Fromille. Illegal procedure against the Warriors forced them to try the two-point conversion from eight yards out. Weaver's first pass of the day was on the conversion attempted and was picked off by Monks.

The Hornets responded immediately with a drive highlighted by a pass from Shaw to fullback Jesse Tom, who turned it into a 57 yard gain. Wellsboro capped off the scoring drive by going for it on fourth-and-14 from the Canton 28-yard line. Shaw's first completion of the game was also a touchdown to Hubbard. The two-point conversion was good and Wellsboro went up 8-6.

At the end of the first quarter and the beginning of the second quarter, Canton put together a 90 yard drive after Wellsboro failed to convert a fourth down deep in Warrior territory. The two-point try failed as Pat Clark stopped Ward short of the goal line, but Canton took the 12-8 lead. Later in the second, Canton added a third runner, Nick Petrowski, to the mix and put together another scoring drive, all on the ground. In the first half, Canton recorded 31 rushes for 171 yards, but had no yards through the air. Weaver's pass on the two-point try was broken up by Jerred Keltz.

With 26 seconds left in the half, the Hornets had time for a few plays. Tom was able to break free on the last play of the half, but only got to the Canton 20-yard line before being pushed out of bounds. Neither side scored in the third quarter, but Shaw did record a fumble recovery from his defensive back position. However, Wellsboro went three and out on that series.

To start the fourth quarter, a long punt by Canton was called back for a procedure penalty. The re-kick put the ball on the Wellsboro 34-yard line. Two plays later, Tom again broke free and ran for 59 yards and the score. The two point attempt failed as the Hornets had to try from eight yards out due to a procedure penalty. The score stayed 18-14 in Canton's favor for ten more minutes until the Hornets' final drive. The Green Hornets will host Jersey Shore this Friday in a non-league match-up. Kickoff is at 7:00 p.m.