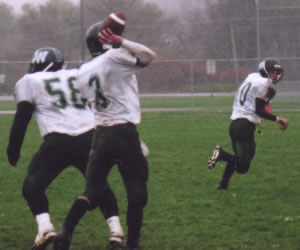 The Wellsboro Green Hornets (3-5) had another solid defensive effort in a 14-6 win over Cowanesque Valley (0-7) Saturday afternoon, October 22, in Westfield.

In the rain and the cold, Wellsboro's defense held the Indians to 83 yards of total offense and did not allow a touchdown. The Hornets' Pat Clark had a big day as he nabbed two interceptions. They gave a great effort. It was a great team win," said Wellsboro head coach Chris Morral.

Wellsboro had three starters sitting out with injuries. During the game, two more players went down with injuries. But, the underclassmen stepped up to the challenge as the Hornets were led in rushing by Sophomore Abram Dennis. He had 13 carries for 83 yards.

Dennis also recorded seven assisted tackles on defense. "He ran hard. I give him a lot of credit." Morral said. It was another young player who started the scoring for the Hornets. Freshman Patrick Driebelbies scored Wellsboro's first touchdown on a 22 yard run in the first quarter. The two-point conversion was no good, but Wellsboro took the 6-0 lead. Driebelbies had five carries for 40 yards and had a reception for five yards.

CV answered right back, though, as John Plummer took the ensuing kickoff 76 yards for a touchdown to knot the score at 6-6.

In the second quarter, junior quarterback Tim Shaw scored what ended up being the winning touchdown on a one yard run. The two point conversion was good as Shaw threw complete to Cameron Hubbard from eight yards out. After halftime, neither team was able to put points on the board and the game ended, 14-6. Morral gave credit to the dominance of the Hornet defense.

"They bent, but they did not break," he said. Shaw had ten tackles, four of them solo. Jerry Heichel had seven tackles and Jerred Keltz was credited with six tackles. Offensively, Shaw was 7-for-24 passing for 86 yards. He connected with Cameron Hubbard three times for 33 yards, Erik Coolidge twice for 29 yards, and Chet Johnson once for 12 yards.

Leading the way for CV was the rushing of Cameron Wattles, who had 15 carries for 49 yards, and Jeremy Moyer who ran 10 times for 18 yards. The Hornets finish out their season with two tough games.

Friday night, they host the Athens Wildcats, After that, they travel to Blossburg to battle the North Penn Panthers for the Morton Jones Memorial Trophy. North Penn is 6-2 and coming off a loss to Towanda. Their only other loss of the year was by one point to Athens.