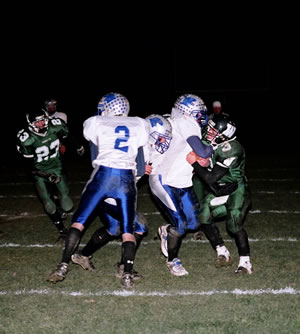 Levi Weiskopff rumbled for 254 yards on 26 carries and four touchdowns as the North Penn Panthers captured the Morton Jones Memorial Trophy by downing rival Wellsboro 35-7, Friday night, November 3, in Wellsboro through the rain.

The win put the Panthers (9-1) squarely in the playoffs and they will host a game this Friday, November 10.

Weiskopff went down with a broken leg in the first quarter of last year's clash in Island Park. This year, he broke tackles and hit the holes that the offensive line opened all night.

"(Wellsboro's) Jesse Tom is a good, hard running back and we shut him down," Dickinson said.

Weiskopff started the scoring late in the first quarter on a drive that started at the Wellsboro 45-yard line. After runs by Cody Groover, Riley Bowen, and Weiskopff, the Panthers were set up at the nine yard line. Weiskopff took it in from there.

After holding Wellsboro to a three and out, Weiskopff topped off another Panther touchdown drive. Weiskopff returned the Hornet punt to the North Penn 47-yard line.

During the 53 yard drive, North Penn twice faced fourth down and converted both times. Weiskopff barreled up the middle for a first down at the Hornet 28-yard line to convert on a fourth and one as the first quarter ended. Bowen, who had 91 yards on 10 carries, followed that up by catching a pass from Justin Harris to convert on a fourth down and five.

Right after that, Weiskopff ran the ball in from 12 yards out. The extra point was off target and North Penn took the 13-0 lead.

The Hornets dodged the shutout on their next drive. The Hornets returned the kickoff to their own 31-yard line. On the first play of the drive, Tim Shaw found Jake Monks for a 30 yard pickup. Shaw finished the drive when he found Monks from 13 yards out for the touchdown. The extra point was good and Wellsboro pulled to within a touchdown, 13-7.

On North Penn's next drive, Justin Harris fumbled and Wellsboro recovered on the Hornet 43-yard line with 1:12 left to go in the half.

Harris made up for his error as he picked off Shaw on the next play. From there, the Panthers threatened to score again before halftime.

With 0.8 seconds left, North Penn lined up for a field goal. An illegal procedure penalty pushed the Panthers back five more yards, but Wilston's kick was short. North Penn went into the locker room with the 13-7 lead.

The Panthers could not be stopped for long. Mark Fidler picked up North Penn's only non-Weiskopff touchdown on the night as he returned the opening kickoff 82 yards. Bowen took the two-point conversion in from two yards out to put North Penn up 21-7.

On their next possession, Wellsboro was again forced to punt.

On back-to-back plays, the Panthers and Hornets traded fumbles in Wellsboro territory.

Weiskopff then topped off another North Penn scoring drive on an 18 yard run. Wilston's extra point increased the Panther lead to 28-0.

The run also put Weiskopff over the 200 yard mark.

After the defense held the Hornets again, Weiskopff struck for the last time. Following a Wellsboro punt, the Panthers took over on their own 28-yard line. They drove the length of the field and Weiskopff topped the drive with a 14 yard scoring run. Wilston's extra point made the final score 35-7.

The final quarter was scoreless as the Panthers played their second string players.

The North Penn Panthers, meanwhile, are practicing for their upcoming playoff game. They host Warrior Run (6-4) from the Central Susquehanna Small School division on Friday, November 10 at 7:00 pm at Island Park.

"They (the Panthers) have got to come ready to play and they are ready," Dickinson said.