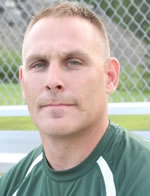 Coach Boyce was the head coach of the Hornet Football team from 2011-2012. Coach Boyce is a former graduate of Wellsboro Area High School, where he was a captain, two-time Defensive Player of the Year, Outstanding Lineman of the Year, and All-NTL at both guard and linebacker.

Coach Boyce first started coaching football in 1995 at the Middle School level in Wellsboro before moving to Reading, PA to coach the Linebackers at Reading High School. Coach Boyce returned to Tioga County in 1998 and spent three years coaching at Cowanesque Valley. Coach Boyce was head coach of the Indians from 1999 to 2000 where he compiled seven career wins and picked up wins over North Penn, Sayre, and Towanda. After a two year coaching absence, Coach Boyce returned to Wellsboro in 2002 to coach the Wide Receivers and Defensive Backs under former head coach Russ Manney.

Coach Boyce currently teaches Kindergarten at the Charlotte Lappla Elementary School in Wellsboro and resides in Tioga with his wife Jill and two girls Brittany and Bethanny Jo.

Hornets top Canton in the fog.

Hornets to Hold Dad and Me Football Camp.

Hornets fall to Sayre 7-10 in overtime.